STATEMENT FROM the artist 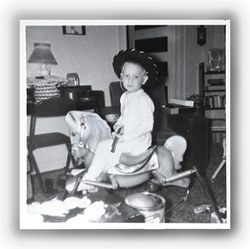 As a child, I received generous support and much positive reinforcement for “staying in the lines” when working in my coloring books. I was amazed at how happy and impressed everyone was at the work I was doing. It was so much fun that it didn’t seem like work to me. As I got older, I was drawing a lot. I would practice emulating the artists of my comic books and even made up some super heroes and villains. A few years later, I created a Dinosaur book using my parents typing paper and my No. 2 pencil, complete with illustrations of each animal and a short paragraph about them.

My Dad was a realist and would say, “How are you going to make a living doing that?” I feel I got my artistic talent and energy from my Mom. Through the years, she was involved in painting, drawing, cross-stitch, tole painting, and quilting. One fond memory I have is watching “Jon Gnagy Learn to Draw” on our black & white TV. We went out and bought the pencils, chalk and drawing paper so we could follow along when the show came on. I eventually received some watercolors and a pad of watercolor paper for one of my birthdays.

I was fortunate to have good art teachers in school and one event really shaped my early development. In fourth or fifth grade our class took a field trip to the Nelson Art Gallery. What a great day it was to see all the incredible paintings and artifacts from the different countries throughout history. When we finally reached the “modern room,” I remember seeing this huge mostly black and white painting through the doorway. As the group got closer to the entrance, I could see more and more of this canvas. It was a Franz Kline, and I was thinking he had to have used a broom to get these big brush strokes.

I was an Art Major in college, but my father passed on from leukemia before graduating and I returned home as the family regrouped. After cutting grass, painting houses, and restaurant work, I hooked up with a color separation company and knew this was what I wanted to do. I went to trade school as this was a four year apprenticeship. I learned a trade that was fairly secretive and usually handed down through families, mainly Swiss and German. Completing the program I became a Dot-etch Artist. After a few years I purchased my first 35mm camera and began documenting the world around me.

Marriage and three kids followed a few years later, but I continued to produce drawings, paintings, collage and slides (from my more expensive) second camera.

During the mid-80s, I chose to learn the new technology that was to eventually replace the harsh chemicals that I used on the film to do retouching and change the color in images. Learning the computer opened up a whole new world for me professionally and creatively.

The Montage series I am currently working on, is created by merging two to four separate photographs together to form an entirely new narrative within the image. I “work” the piece by manipulating the contrast, color spectrum, and saturation to alter the overall mood; including masking when needed, and burning or dodging areas. Whether I am working abstractly or using recognizable objects in the  photograph; the textures, color, and structure are strongly considered when deciding which shots to use in the beginning steps of the process. My love of painting is helping me with certain compositional decisions to create a looser, more painterly appearance. In some cases, I am also combining photos of my paintings, artwork and photo-collages. In my photography, I am seeking out design in nature, architecture, and abstracted forms, often in a minimalist approach. Staying true to the history of photography, I feel the need to record the ordinary, mundane and everyday things for the viewer to see as a new discovery. Experimenting with color inversion, I’m building the otherworldly aspect that some of the abstract surrealism contains. When combining the shots, the original compositions of each photo are maintained in about 80% of the works. Using masking and layer effects allows each image to have six to ten versions of the same basic merged image. In each version I am emphasizing different aspects of the composition to create a separate but simultaneously connected image. Emotionally, for me, the combined images are re-imagined as a surreal memory of events.